Popular Gospel Actor and Evangelist, Mike Bamiloye in a recent post on his official Facebook page sends an important message to the about the gospel of salvation. He titled it “The Simplicity Of The Gospel Of Salvation.”

According to him, by nature, you are born in sin and a sinner by nature and doomed for judgement in Hell. For the soul that sins shall die eternally, but the death of Jesus Christ on the cross and shedding of His Blood, has been made a sacrifice for mankind. So, the death and sacrifice of Jesus Christ had paid for the sins of all mankind including those who are to be born. The debt fully paid.

He then read rh book of Isaiah 53:5 which says, “But He was wounded for our transgressions, He was bruised for our iniquities; The chastisement for our peace was upon Him, And by His stripes we are healed.” Therefore, no one can receive forgiveness and justification, except through Jesus Christ who has the receipt of the payment. NOW that the judgement for your sins have been fully paid for on the cross, you have to Accept the free salvation and justification provided by Jesus Christ on the cross.

So, if you accept the offer, you are saved, but if you reject the free offer of salvation, you are condemned forever. If after you have been saved from the condemnation of sin, a Child of God still continue to live in sins, he shall be under the danger of terrible judgement at the Judgement seat of christ. If you have accepted the Lord Jesus Christ as your Lord and Saviour, then your judgement is no longer in the hand of the Satan, but in the hand of Jesus Christ who paid for your transgression with his blood on the cross.

Finally, he said that there is only one sin that is unforgivable and asked, “Is that sin against the Holy Spirit?” He then read from the book of John 3:36 which says, “He who believes in the Son has everlasting life; and he who does not believe the Son shall not see life, but the wrath of God abides on him.” According to him, the sin is turning your back against the blood and the death of Jesus Christ on the cross. That is rejection of the sacrifice for your sins.

Finally, he said that such person can never be forgiven, he will have to pay for his sins in Eternal Hell. However, the category of people who cannot be forgiven by God are those Who Turn their backs against the blood and death of Jesus Christ and his son thereby rejecting the sacrifice for their sins. This category of people will end in hell fire. 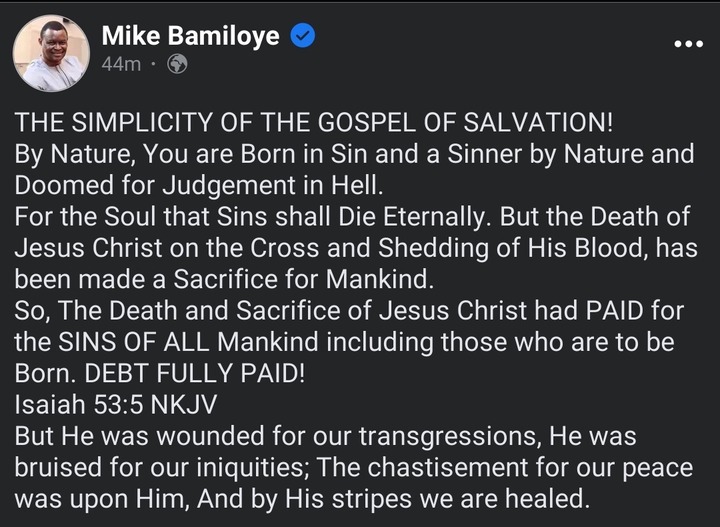 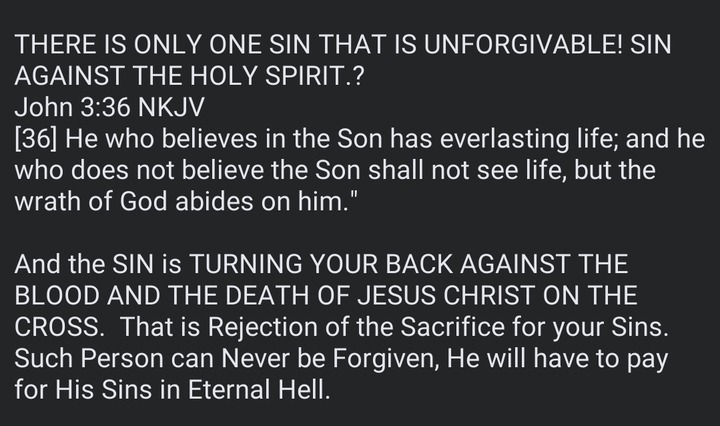